The History of Holding

The Moscow based Company "Svetoservis" was founded in 1991, having offered the service of from “scratch to “ design, installation and operation of all types of lighting systems. This proposal broke the usual representation of clearly defined areas of work for the same kind of organizations of the Soviet planned economy, but that it proved popular and led to the further growth of the company.

A huge step forward was taken in 1994: the Moscow government made the fateful decision to establish in a unified lighting environment. Moscow of that time plunged into darkness during the evening and all through the night. This can easily be seen in the old movies. Architectural lighting had to be revived, to say the least, in reality it had to almost be rebuilt from scratch. Incandescent light bulbs that were used in the 50-70s to illuminate some objects during the holidays, have long ago deteriorated. Once again, the "loop" principle has taken its toll. "Svetoservis" was the only company at that time that had the ability to do “anything for any building” in Moscow.

On the eve of 1994 one of the “Stalin” skyscrapers, (built during the time when Stalin was in power) the famous hotel "Ukraine", was illuminated. Then there were bridges, railway stations, monuments, temples and other projects. By the end of 1996, over 200 buildings and structures have been illuminated. A program «Light-in-Night», developed by Svetoservis, was used to do all the calculations.

At the same time we were the first to receive an invitation from the Union of Designers of Russia to take part in the annual Russian design exhibition in the Central House of Artists. The photos of the evening Moscow were hung in the hallway of the second floor. A guestbook was kept to find out what the public had to say about the lighting. Here are some of the comments: 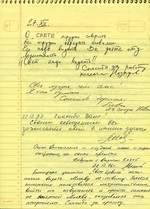 "I would like to use metro less, walk the streets of the night Moscow. It turns out that it’s beautiful.

"With the light all around you light up our souls."

"Very impressive and creates a calm and good atmosphere, which is very nice.

Grandfather and his granddaughter Katya "

"The light is hard to talk about. It is difficult to convey using words. It must be seen. You provide this opportunity.

Light must be seen!

This simply and modest comment was given by the Chairman of the Union of Designers of Russia Y. Nazarov.

It was for the first time when the "Victoria" award has been given to us in the "Environmental design" category. Before that there were international and European prizes "for the quality of services" and etc. But it was important and valuable to be recognized in Russia. In 1997, the CEO and the Deputy Design Director received the State Prize in Literature and Art "for successful work in the field of architectural Moscow lighting." The evening city was the best advertisement for us.

But we are not limited to art, which, of course, is an architectural lighting. Although the work with light - it is always a creative search.

In 1999, for the first time in Russia European standards were applied to the newly constructed in Moscow tunnels, where appropriate brightness of the road surface and speed is an important criteria. In order to make proper calculations, Svetoservis developed its own program - «Light-in-Night» (road).

In the XXI century "Svetoservis" became a group of companies who work in different cities of Russia, dealing with road, street, park, tunnel, and, of course, architectural lighting.